Despite the challenges of 2020, progress was achieved in the battle to end Esophageal Cancer – much of it thanks to the dedication and effort by members of our inspiring ECAN family!

A message from Mindy Mintz Mordecai, ECAN’s President and CEO. 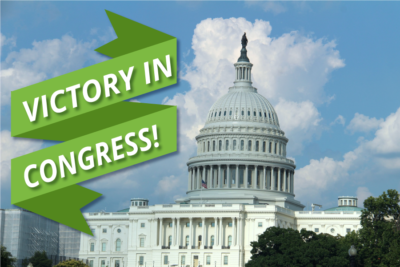 We started the year on a high note – fresh off a victory in Congress!  Because of you and thousands of ECAN supporters, the United States Congress included Esophageal Cancer in a $110 million Cancer Research Program for the first time in history!

We reached out to Esophageal Cancer researchers to make sure they were aware of this new opportunity and many filed applications for funding.  We should know in the next few months which proposals were approved – and we will be sure to let you know!

You and thousands of members of the ECAN family were powerful advocates once again as we launched our campaign to keep Esophageal Cancer in the Peer-Reviewed Cancer Research Program (PRCRP) for a second year. By the end of 2020, Congress voted to again include Esophageal Cancer in this important program – and appropriated $115 million to fund the PRCRP.  We will start our third year of advocacy with lawmakers in the coming weeks! 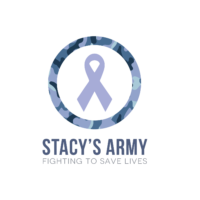 Recruiting our Army of Awareness Raisers!
Before we knew a pandemic was afoot, we launched Stacy’s Army – our new plan to arm you with all the tools you need to raise awareness in your own community named for one of our most inspirational supporters, Stacy Alexander.

Fifty people signed up within the first 24 hours – and we were so excited for all we could accomplish!  But because most of the “missions” we planned for our troops required face-to-face interactions, we had to put our plans on hold as that became a dangerous request.  We are ready to re-deploy as soon as it’s once again safe for our fighters to get back on the battlefield! 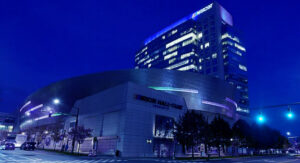 Light the Night in Periwinkle
During Esophageal Cancer Awareness Month, ECAN and our supporters worked to make sure 20 buildings and landmarks across the US (including Niagara Falls!) lit the night sky in Esophageal Cancer’s Periwinkle Blue – and we sent news releases to let folks in those communities know the importance of this illumination!

Educational Webinars
ECAN began hosting informative webinars in April on a wide range of subjects (you’ll find recordings of all of our webinars on our website) and we’ve continued these educational forums throughout the year and plan more for 2021.

Here’s some of the feedback we received:

“One of the most amazing talks I have participated in!”

“So helpful in understanding this terrible disease. Thank you so very much!!”

“I have learned more about Barrett’s from the ECAN webinars than I ever learned from my GI doc. Thank you for what you are doing so we can be advocates for ourselves.” 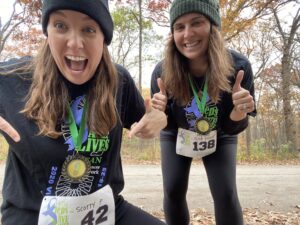 Events Inspired Us!
We were able to host our Steps to Save Lives 5K event in January in San Diego (click here to check out a video about one of our participants), but the other eight events we had hoped to host had to be put on hold.

So we were thrilled with the response you gave when we announced that we were going to host a Virtual Steps to Save Lives 5K in October!

Nearly 300 people registered and more than $45,000 was raised! Even better, you could really feel a strong sense of community – even though we couldn’t be together physically. You inspired us with the amazing spirit you demonstrated throughout the event!  So much so that we are planning another for April of 2021.

Exciting New Progress in Immunotherapy
For all Esophageal Cancer patients, the release of several clinical studies brought amazing good news: studies of immunotherapies Opdivo and Keytruda showed real promise for extended survival in a first-line setting – meaning patients didn’t have to try other therapies that didn’t work for them in order to qualify to these new treatments.

This includes a trial led by former ECAN Board member Ronan J. Kelly, M.D., Director of Oncology at the Charles A. Sammons Cancer Center at Baylor University Medical Center.  This large, innovative study provided patients with Opdivo after their esophagectomies – the first immunotherapy study to show real promise in Esophageal Cancer patients without metastasis.

The FDA has just granted Emergency Review status to Keytruda for Esophageal Cancer patients with metastatic or advanced disease.  We are hopeful for more FDA approvals shortly. 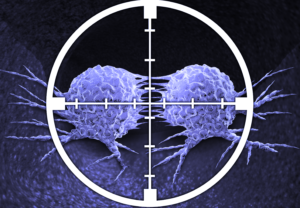 Proving the Benefit of Advocacy

We shared interviews we conducted with the lead investigators of several of these studies. And I experienced one of the most gratifying moments of the eleven years since I started ECAN.

Nine years ago, ECAN was able to convince the National Cancer Institute to include Esophageal Cancer in that important cancer genome mapping project.  We didn’t know exactly what the result would be, but we knew that this genome research was the future of any progress that would happen for our patients.  Hearing those words from a researcher who is making those new therapies possible for our patients was a wonderful confirmation of our convictions!

A Focus on Patients Diagnosed at Young Ages
Over the years, we’ve seen an increase in patients diagnosed at very young ages – some as young as 16 – and often at advanced stages.  Our anecdotal observations were confirmed in a study released last week that showed a doubling of young adult diagnoses over the past 40 year.  Earlier this year, we reached out to the National Cancer Institute’s MyPart Network to form a partnership to begin Natural History Studies of patients diagnosed with Esophageal Cancer before the age of 39. We hope to launch this effort in early 2021.

National Conference
As we approach the end of 2020, we are working to put together an exciting virtual conference to bring together patients, caregivers, healthcare providers, researchers, and industry staff for education and collaboration.  If we are able to make this a reality, we will be back to you shortly with more details.

In a year filled with so much uncertainty, I think you made a lot happen! And all of us at ECAN are so grateful.  Personally, I am also very proud.  And I hope you are, too.  Without you,  none of this could happen.  I hope you’ll let that sink in.  And that you’ll feel a bright ray of optimism shining through your memories of this year – and look forward to the year to come with more hope for a better future for patients at risk for Esophageal Cancer.