From a Child’s Heart

Like so many organizations fighting deadly disease, the impetus to establish ECAN began with profound grief and frustration. In 2007, John “Monte” Mordecai was diagnosed with stage III Esophageal Cancer. While Monte and his Johns Hopkins physicians waged a brave battle that included every treatment modality available, his elder daughter wanted to fight his disease as well. A 12-year-old dancer at the time, Mara Mordecai decided she wanted more people to understand that something as common as heartburn could lead to something as deadly as her father’s disease. From that desire, an event and non-profit corporation known as Dance for the Cure was born.

Sadly, Mara’s father did not live to see his daughter’s efforts come to fruition. Monte died in March of 2008 and the first Dance for the Cure was held just weeks later, on June 1, 2008. The event raised more than $20,000 and through media outreach and public education efforts, Dance for the Cure began to raise awareness about Esophageal Cancer in the mid-Atlantic region. A second annual event in 2009 achieved similar goals. 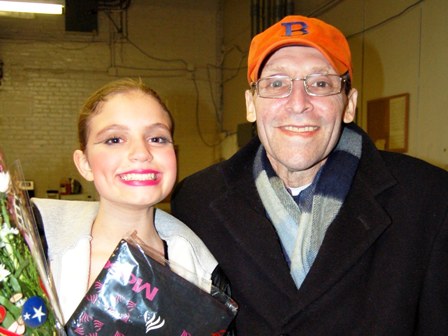 Mara backstage at the Lyric Opera House in Baltimore with her father, Monte Mordecai in December 2007 after performing with the Moscow Ballet in the Great Russian Nutcracker.

Monte’s widow, Mindy Mintz Mordecai, and the impressive array of dedicated professionals she recruited to serve on the Board of Directors of this new non-profit organization were well aware that much change was necessary to prevent more families from experiencing the devastation Esophageal Cancer caused the Mordecais. With that conviction, the Board voted in June of 2009 to change the name of the organization to reflect its broader mission, and ECAN, the Esophageal Cancer Action Network was born.

Sounding the Alarm: Heartburn can cause Cancer!

Expanding our Reach and Impact

Over time, it became clear that an effective battle with this devastating disease must be fought on several levels.  While increased awareness remains ECAN’s primary focus, educating patients about their options for prevention, early detection and treatment has become a priority. ECAN has become a trusted and reliable source for the latest in medical research affecting those at risk for Esophageal Cancer.

Supporting the Quest for Answers

Early on, ECAN realized that its supporters were only voices advocating for those at risk for Esophageal Cancer in our nation’s halls of power. So ECAN successfully advocated for the National Cancer Institute (NCI) to change course and include Esophageal Cancer in its groundbreaking genome-mapping project, The Cancer Genome Atlas (TCGA).  The journal Nature published the results of that important research in January 2017.  Those findings form the foundation for important future discoveries of potential targets for treatment.

Join Our Campaign for Research to Save Lives

ECAN is now engaged in a campaign to convince Congress to include Esophageal Cancer in the only cancer research program controlled by Congress.  Despite its distinction as one of the fastest increasing cancer diagnoses in the United States, Esophageal Cancer is currently among the most poorly funded cancers in terms of federal research dollars. You can get involved and support the effort to change that by signing up here to advocate with your own elected officials.