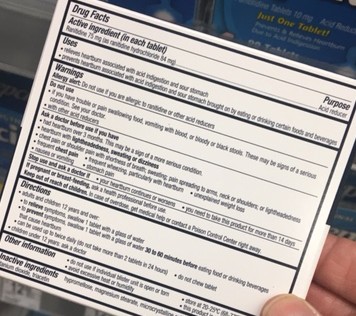 The Citizen Petition requests that the FDA order new labels on all OTC acid reflux medications. The labels would include a bold warning reading: PERSISTENT HEARTBURN CAN INDICATE INCREASED RISK OF DEVELOPING ESOPHAGEAL CANCER. THIS MEDICATION WILL NOT ELIMINATE THAT RISK.

“So many patients tell us that they took over-the-counter heartburn medications for years, but never knew they were at risk for cancer – until it was too late,” said ECAN’s Board Chairman Dr. John Lipham who is Chief, Upper GI and General Surgery, Keck School of Medicine at the University of Southern California. Dr. Lipham signed the petition with ECAN President & CEO Mindy Mintz Mordecai. “We know we can save lives with increased awareness and early detection,” Dr. Lipham added.

Many Have Heartburn – Few are Aware of Cancer Risk

As many as 15 million Americans experience heartburn every day. Persistent heartburn (two or more times per week) can be a symptom of gastroesophageal reflux disease (GERD). Reflux disease is a condition where stomach contents, including acid, splash into the esophagus, producing cellular changes that can ultimately result in cancer. For some patients with esophageal cancer, heartburn symptoms are the only warning they will ever receive that they are at risk for cancer.

Too often esophageal cancer patients’ first sign that something is wrong is when they have a tumor in their esophagus that prevents swallowing. Unfortunately, by then, treatment is rarely successful. Less than one in five patients will survive five years after an esophageal cancer diagnosis, largely because the disease is usually discovered at late stages. ECAN recently commissioned a market research survey of more than 1,000 American adults. Only 14 percent were aware that reflux disease could cause cancer.

“We aren’t surprised by the numbers, but we are motivated to change them,” said Mordecai, who founded ECAN after losing her husband and the father of her young daughters to esophageal cancer nine years ago. “Folks need to know that if they are experiencing reflux symptoms on a regular basis, they should see their doctors and get checked – that’s why we filed our Petition.”

“Esophageal Cancer is preventable and our survey shows why the labels we are requesting are so necessary. We can save lives and stop the senseless losses that families like ours continue to endure,” she added.

Many OTC drug products relieve or prevent heartburn associated with acid indigestion. Some were formerly available by prescription and are very effective in relieving the symptoms associated with heartburn. Because these products work so well, many patients will not tell their healthcare providers about their persistent heartburn. Like most Americans, they don’t know that acid reflux can lead to Barrett’s Esophagus, the precursor to esophageal cancer, and esophageal cancer.

“Existing warnings on anti-reflux medications are not sufficient to alert patients to the risk of esophageal cancer associated with persistent heartburn resulting from reflux disease, acid indigestion or sour stomach,” said David Rosen, a partner with the law firm of Foley & Lardner who worked for the FDA for 15 years and is representing ECAN in its filing. “The FDA should act swiftly to include a bold prominent and strong warning label to better inform patients of the risks associated with persistent heartburn and the need to see their physician due to the risk of esophageal cancer that can go undetected if the patient is getting symptomatic relief from the OTC drug products,” Rosen said.

Coverage of Petition has Reached Millions

Even before the FDA rules on ECAN’s request, it is still serving to increase awareness. The public is learning about the link between reflux disease and Esophageal Cancer because of the media coverage of the Citizen Petition that has reached millions of Americans from coast-to-coast through newspapers, magazines, television, radio and through online news sources.

ECAN encourages those who support the Petition to contact ECAN at info@ecan.org to find out how to let the FDA know that you are in favor of the new warning labels. ECAN is hoping for a public hearing on the Petition that would allow experts to testify about why the labels are so important in the battle against Esophageal Cancer, the fastest increasing cancer among American men. Here are some examples of the coverage the Petition has garnered: 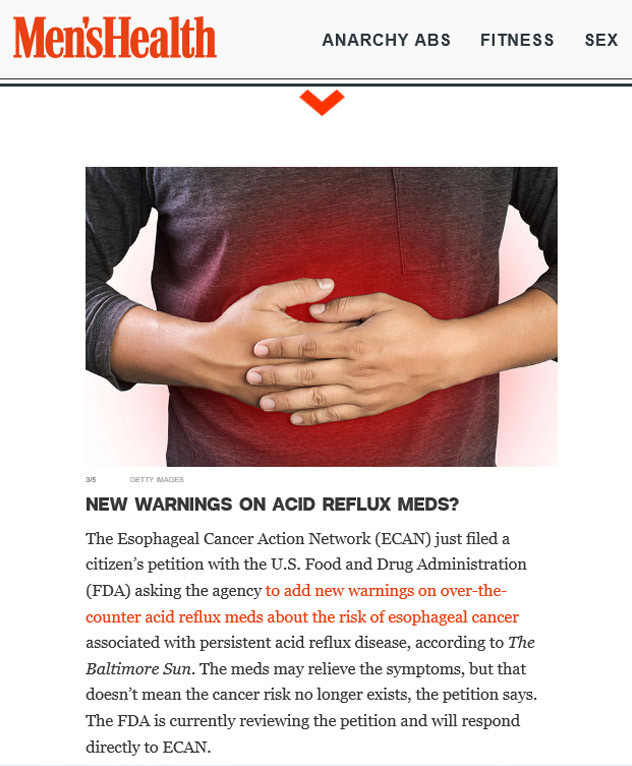