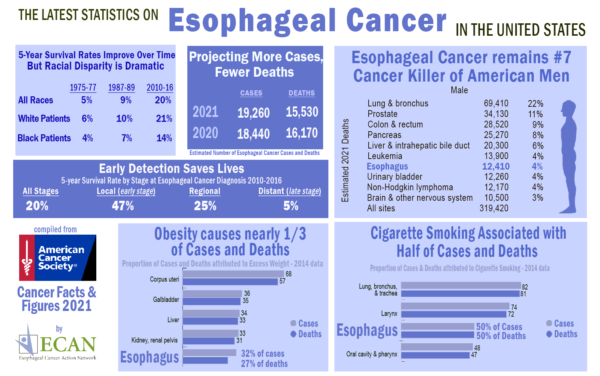 The data released as part of the ACS report Cancer Facts & Figures 2021 also showed that half of American Esophageal Cancer cases and deaths in 2014 were caused by cigarette smoking and nearly one-third were caused by excess weight.  The report showed that while the overall 5-year survival rate for Esophageal Cancer improved from 1975 at just 5% to 2016 when the overall survival rate reached 20%, the survival rate for Black patients did not improve so dramatically, going from 4% to just 14% over the same period of time.

You can find out more about early detection of Esophageal Cancer and how Reflux Disease can put patients at higher risk for this deadly cancer with ECAN’s free downloadable Guide for Patients.