For the second year in a row, thousands of ECAN advocates made their voices heard and convinced lawmakers in the United States Congress to include Esophageal Cancer in a multi-million dollar cancer research program.  Congress appropriated $115 million for the program in 2021.  The measure awaits President Trump’s signature to become law.

Now it’s Time to Do It Again!
Early in 2021, ECAN advocates will once again reach out to lawmakers to assure that Esophageal Cancer is included in the Peer-Reviewed Cancer Research Program (PRCRP) of the Department of Defense.  If you haven’t already, please be sure to sign up to become an advocate and make millions in additional funding available to Esophageal Cancer researchers.

Advocates made History in 2019 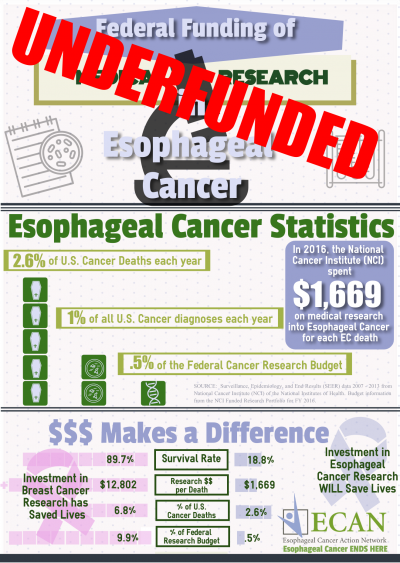 Thanks to thousands in the ECAN family, for the first time in history, Esophageal Cancer was included in a multi-million dollar cancer research fund controlled by Congress.  ECAN supporters throughout the nation sent letters, made phone calls, and signed petitions this year to show how much increased research funding matters to them.

The result is something we were told ECAN would not be able to do.  In ECAN’s first year of attempting to get Esophageal Cancer included in the Peer-Reviewed Cancer Research Program (PRCRP) of the Department of Defense, we gained the support we needed in both chambers of Congress – and the measure was signed into law by the President in December of 2019!

That means researchers studying Esophageal Cancer were eligible to apply for grants from a program with $110 million in funding for 2020!

Research funding makes a difference. In 2016, the National Cancer Institute spent $1,669 on medical research into Esophageal Cancer for each death due to this devastating disease. It amounted to just one-half of a percent of the total federal cancer research budget. But Esophageal Cancer is responsible for 2.6% of all of the cancer deaths in this country.

A breast cancer diagnosis used to be viewed as a death sentence – today its survival rate is 89.7%. The survival rate for Esophageal Cancer is 20%.  This shows what a difference research funding can make!